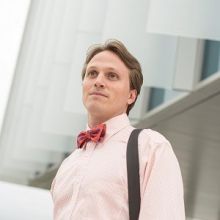 Co-Editor-in-Chief, Journal of Mass Spectrometry and Advances in the Clinical Lab (JMSACL)

Dr. Garrett received his undergraduate degree from the University of Georgia in Chemistry, graduating Summa Cum Laude with Highest Honors.  As an undergraduate, he worked in the lab of Dr. I. Jonathan Amster on the characterization of bacterial proteins using MALDI-TOF.  After 2 years working in industry to gain experience and technical skills in the scientific industry, he enrolled in the Ph.D. program at the University of Florida, working under the direction of Dr. Richard A. Yost.  As a graduate student, he designed and developed the first imaging mass spectrometer based on an ion trap through a partnership with Thermo, and studied the disposition and characterization of phospholipids in brain tissue.  He joined the faculty at the University of Florida College of Medicine in 2006, where he has developed a research program in small molecule quantitative and semi-quantitative analysis for clinical and biological research using mass spectrometry.  Dr. Garrett was promoted to Associate Professor with Tenure in 2017 in the UF Department of Pathology, Immunology and Laboratory Medicine.

In metabolomics, Dr. Garrett has developed technology, bioinformatic processing methods, quality metrics and data analyses.  Work in his group has included the development of LipidMatch as an open-source and vendor-neutral software platform to identify lipids based on fragmentation pathways.  In addition, his group developed an open-source solution for deep characterization of metabolites and lipids called Iterative-Exclusion (IE Omics), which has improved the annotation of lipids by over 50 percent, helping to dig deeper into the lipidome.  Research in his group includes the use of ultra-high pressure liquid chromatography coupled to mass spectrometry as well as the use of paperspray, MALDI, DESI, and liquid microjunction surface analysis in the metabolomic space. A key aspect of his work has been a focus on collaborative science, as he believes through collaboration better discoveries can be made. Collaborative and independent research has covered a wide range of applications.  Work in his group has helped to define the metabolic characteristics of canine diabetes, the interaction of a key microbe in relation to kidney stone development, the urinary metabolomic patterns associated with prostate cancer, prostatitis and BPH, the use of tryptophan and kynurenine in monitoring success or failure of organ transplantation, the metabolic and lipidomic alterations in X-linked rare diseases, the post chemotherapy health and wellbeing of breast cancer survivors, that stability of insulin in the marketplace, and the real-time characterization of metabolic changes in deep brain stimulation to name a few.

Dr. Garrett has supervised the research of 18 graduate students and 3 post-doctoral students during the past 15 years, graduating 11 PhDs from his group.  He has served as PI or Co-PI on grants and contracts totaling over $39M of funding.  Research in the group has led to over 100 peer-reviewed publications with an h-index of 27 and an i10-index of 72.  His publications have resulted in over 3000 citations.

In 2016, Dr. Garrett helped establish the Southeast Center for Integrated Metabolomics (SECIM) as part of an NIH-funded regional comprehensive metabolomics resource.  Since then, he has developed high-throughput metabolomics approaches that are both highly reproducible and comprehensive.  SECIM in now recognized as a national and global contributor to metabolomics science, where we develop technology as well as train the next generation of scientists.  We developed key educational opportunities that included Winter and Summer schools in metabolomics science as well as workshops designed at teaching statistical analyses and new technology.  He is currently the Co-Director of SECIM.  He has worked closely with clinical labs to translate methods for research into clinical tests and to develop new technology to implement in the clinical lab.  He was elected Chief of Experimental Pathology at UF in 2019.

Throughout his career, Dr. Garrett has served the broader scientific community in several ways.  He co-taught the imaging mass spectrometry short course from 2010 to 2013, he Co-organized the ASMS Asilomar meeting in 2017 entitled “Impact of Metabolomics in Translational and Clinical Research.  He was a member of the Mass Spectrometry in the Clinical Lab (MSACL) program committee from 2017-2019, leading the program for metabolomics.  He has co-taught a short course for MSACL since 2016 on “Application of High-Resolution Mass Spectrometry and Metabolomics in Clinical Analysis”.  He is currently serving as a board member for the Metabolomics Association of North America (MANA).  He is also an editor for PloS One and the Journal for Mass Spectrometry Advances in the Clinical Lab (JMSACL).  Along with these, he has also served as a program chair for ASMS on several occasions as well as Pittcon.  Locally, he serves on the Land Use Committee and the Graduation Committee for UF.

Dr. Garrett has developed technology, bioinformatics and quality metrics in metabolomics.  Work in his group includes LipidMatch as an open-source platform to identify lipids based on fragmentation pathways and Iterative Exclusion MS/MS to enable deep characterization of metabolites. He has served as PI or Co-PI on grants totaling over $39M.